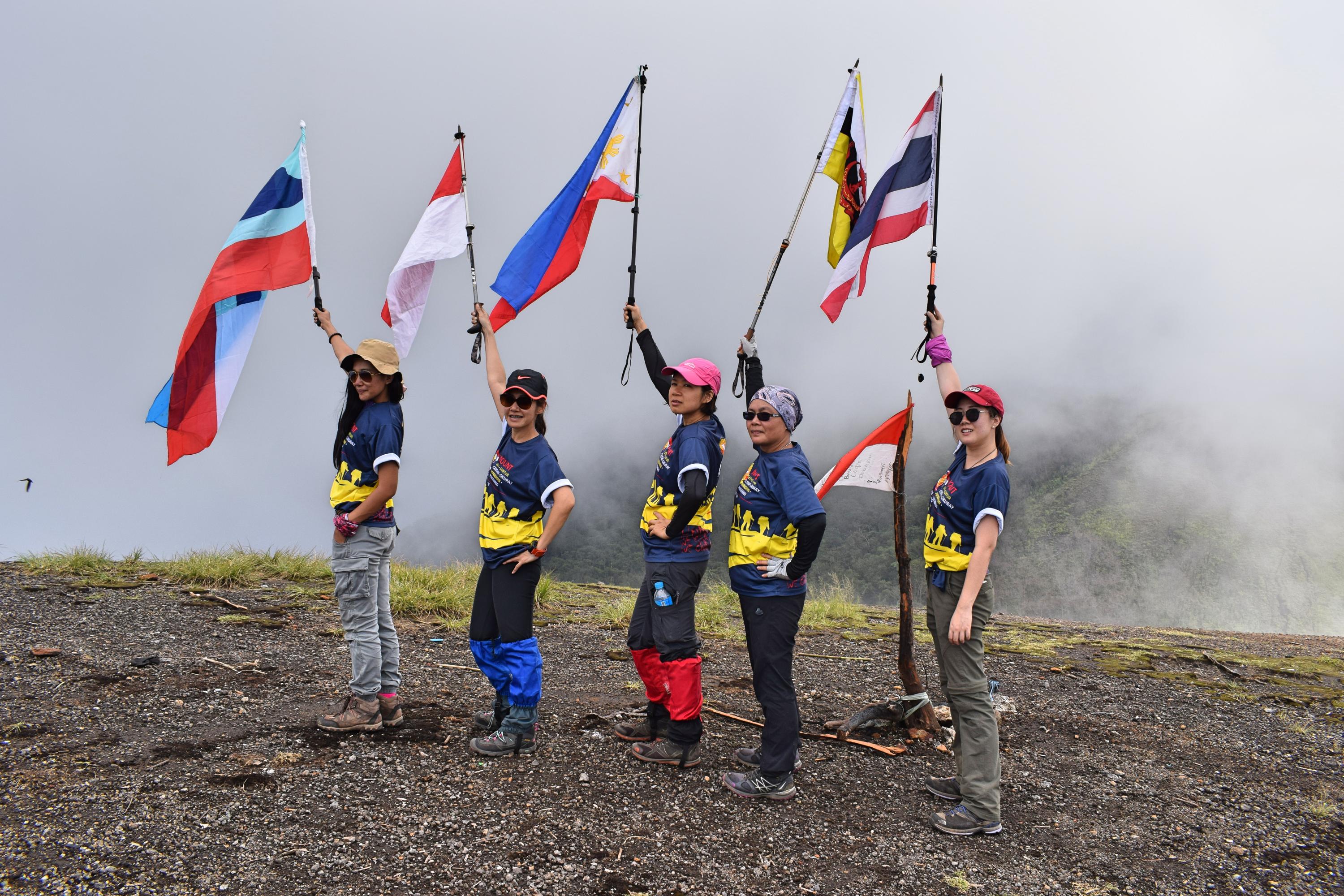 Such a refreshing flight from Singapore to Bandung. Haven’t noticed that some of the guests of the flights were also attending the event until we picked up our luggage. The first night was to welcome participants. Had a nice dinner and discussed the plan of scaling 6 mountains in 6 days. That was my second time to join the event organized by Jemmy of Indonesia and Khashiem of Brunei Darussalam. This expedition was established since 2014 to promote camaraderie among ASEAN trekkers and to raise awareness in some social issues.

Mt. Pangrango is a dormant stratovolcano located in the Sunda Arc of West Java, Indonesia with an elevation of 3019 masl. This is the first mountain among the 6 so everybody got energy. The trail was easy and long. Going to the campsite, you’ll pass by several hot springs along the trails. It was all forest on the summit with a little view of Mt. Gede. The campsite was huge. It can accommodate more or less 50 tents. Summit assault right after we reached the campsite. It was raining so it affects the trail and visibility. Reached the summit before dark and it was freezing cold. Descending was really long and I was sleepy. We were looking for the signage closed to the campsite but failed to locate it. It was almost 2000H when we reached the campsite. Dinner and put ourselves to sleep.

At a towering height of 2958 masl stands this stratovolcano adjacent to Mt. Pangrango. Erupted last 1957. Wake up call at 0000H. It felt like I wanted to extend my sleep but I heard other people cramming. Porters and guide preparing for breakfast and summit assault. Black coffee and some fried bananas were served. Now it’s a sign that I should go out of my tent. By the way, I was all alone inside the tent. The temperature was just perfect. Started the trek around 0100H and reached the summit at 0700H. The trail was okay. The view from the summit was awesome. The crater can be seen with lots of sulfur vents. We somehow managed to witness the sunrise. Took some photo and descend. Reaching the campsite was easier since it was already light. After we took our lunch and packed our bags, we descended back to the basecamp. On the way, different flora and fauna can be seen. Including the white-haired monkey, unique flowers and berries. The boiling water falls (Air Panas) was the most gorgeous one can witness. It’s just along the trail. Managed to dip at the waterfalls with Juan (Filipino trekker). From there, it was a long trail which leads us to the paved pathway all the way down to the basecamp Cibodas. Reached the basecamp at around 1700H. Took a shower and traveled to the next basecamp for Mt. Ciremai.

The highest mountain in West Java with an elevation of 3078 masl located southwest of Cirebon city. Started the trek to the campsite at 0734H and arrived at 1444H. The rain was on and off. Reaching the campsite wet, we were served with hot drinks by our very accommodating organizer Jemmy. The campsite can accommodate more or less 20 tents nestled with centuries-old trees. It was too early so we had a lot of time to rest and enjoy our coffee over good conversation. Wake up call was 0300H. After 30 minutes, we proceeded for summit assault. Poor visibility hinders the trail. Arrived at the summit at 0640H. The summit has a huge platform which offers a 360’ view of the surroundings especially the grand crater spewing sulfur & other volcanic gases. It is possible to trek around the volcano. We were so lucky to have a clearing at the summit which gives us a clear view of the crater. Descending to the campsite, one can do side trip at the cave. We found leaf fossils along the trails. 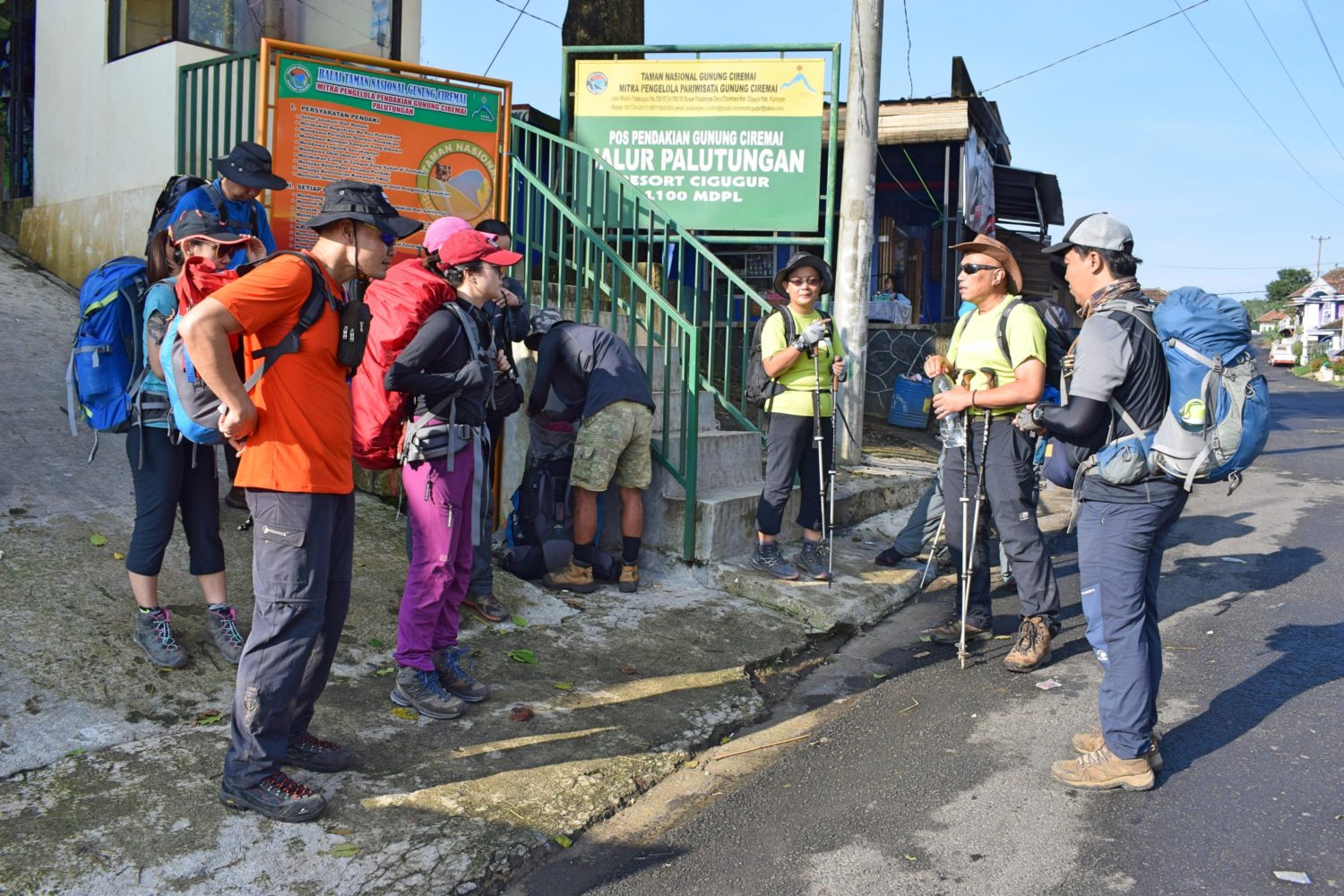 This is where we had the best sunrise among the 6 mountains. The trail was easy. At the major jump-off, acres of tea plantations cover the slopes and valleys. You’ll notice wild boar tracks along the way. Team Thailand who arrived earlier at the campsite was too lucky to witness 3 wild boars who weren’t hesitant to show up at the campsite. Scattered traces of forest fires were observed. Summit offers 360′ view of the surroundings. It has a concrete structure that protects the climber in bad weather. Elevation: 2,821 masl.

The most scenic, memorable and dramatic landscape among the 6 mountains at a towering height of 2665 masl. Traveling to the basecamp at 0000H was rewarding. The sky was perfectly lit by billions of stars. Upon arrival at the basecamp, we grabbed some coffee and immediately proceeded for a trek. Lucky to witness the sunrise at Kawa Papandayan. Kawa is a series of sulfur vents along the trails and an hour away to the dead forest.

The lady from the store apprehended us that it’s not permitted to climb the summit due to a landslide. The dead forest has one of the unique landscape I’ve been in Indonesia. It’s like an enormous eruption happened at the nearby volcano that destroyed this once a thick forest. I think this is the highlight when you climb here. There were so many people in this spot. We even found a goPro camera left hanging on the dead tree. We hope to find the owner. Advancing to Tegal Alun was a forest of bonsai trees and few water springs along the trail. The team reached the Tegal Alun with a thick fog covering this savannah. It’s not allowed to camp here since it’s part of a conservation area. I can vividly recall the fresh scent of the flowers as I walked along the edelweiss trail. Tapping distance was observed among us to maintain the integrity of the group since we had poor visibility. We passed by a river going down to the forest that was burned last year. More than 2 hours to reach the summit. I felt sorry for this dead jungle. I can imagine how the wildlife had struggled just to survive and retain their population. I don’t know if it was manmade or just a natural disaster. But nature has its own way of healing. 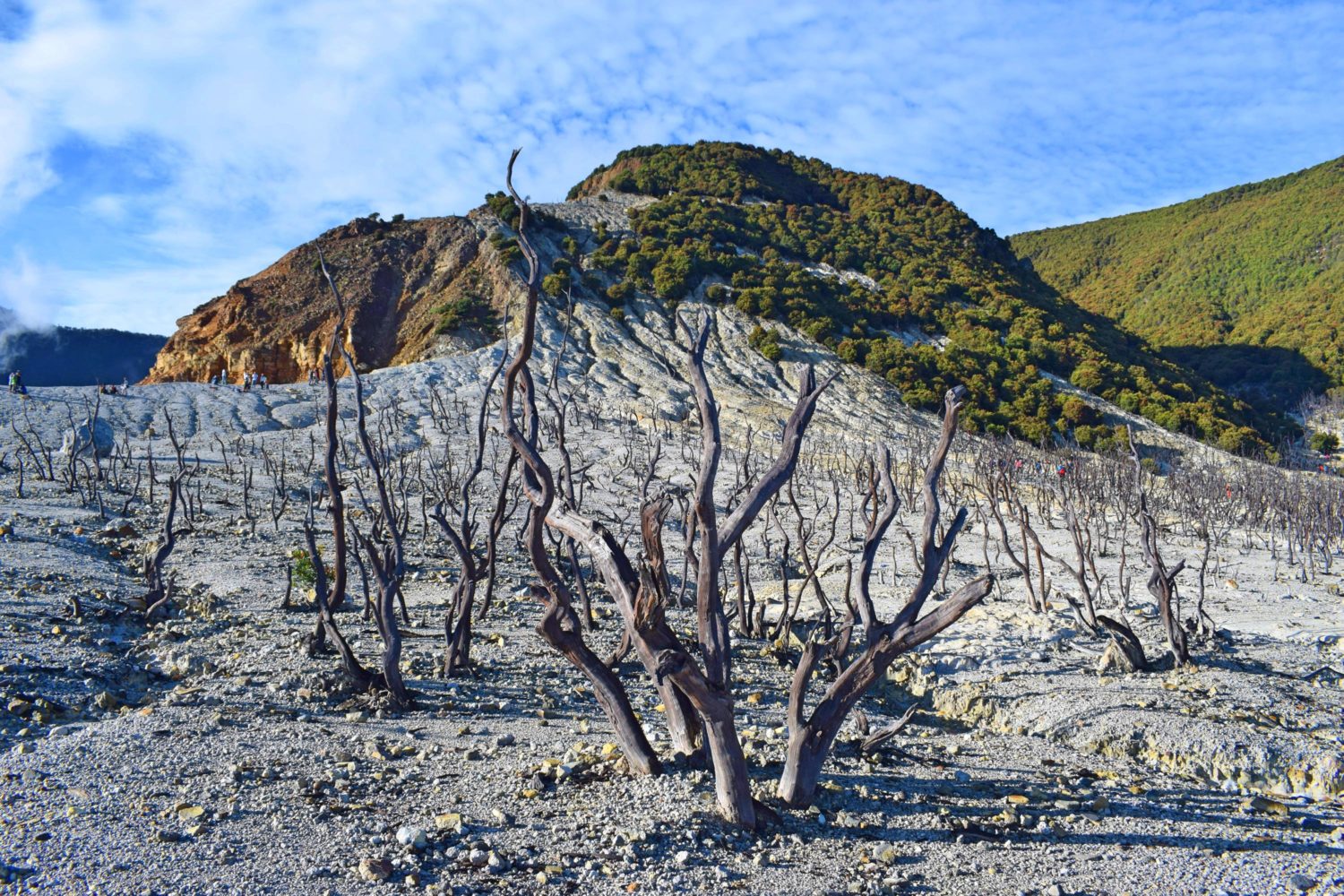 The ASEAN trekkers arrived at the summit at 0940H. It was all burnt. Charcoals are everywhere. The fog covered and protect us from the heat. Group picture was done and back for descend. The team decided to stop by the campsite to grab hot drinks and nasi goreng. The campsite was huge and impacted. Many mountain bikers slowly descending to the basecamp.

I admired them for all the energy they got. Continued the trek going to the basecamp. Rain poured generously. Reached the basecamp at 1525H.

With an elevation of 2249 masl, this is special to me due to its unique landscape feature. One’s real test for patience will be challenged in this mountain. Started the trek at 0000H. Mixed emotions were felt. This is the last mountain among the 6. It felt like I want to finish this immediately. 1 river crossing entering the tree line and up to the campsite. From there, it’s a direct trail leading to the first peak. When you plan to climb here, please take note that this is a multi-peaks mountain. The sunrise was gorgeous on the side of Mt. Papandayan. Mt. Ciremai flared up on the other side with orange clouds on top of it. Like volcanic ash freshly spewed by its generous crater. Here comes, the first peak with a small basin and a vastly eroded side. Reaching the second peak, we had a breakfast of hot drinks and bread. In between 2nd and 3rd peak, were series of crevices-producing steam. The hot gas from the ground relaxes our nostrils and it created a different ambiance. Wildflowers and wild berries were abundant along the trail. The good thing was, we were the only people climbing that day. No wonder. It’s a multi-peaks mountain. 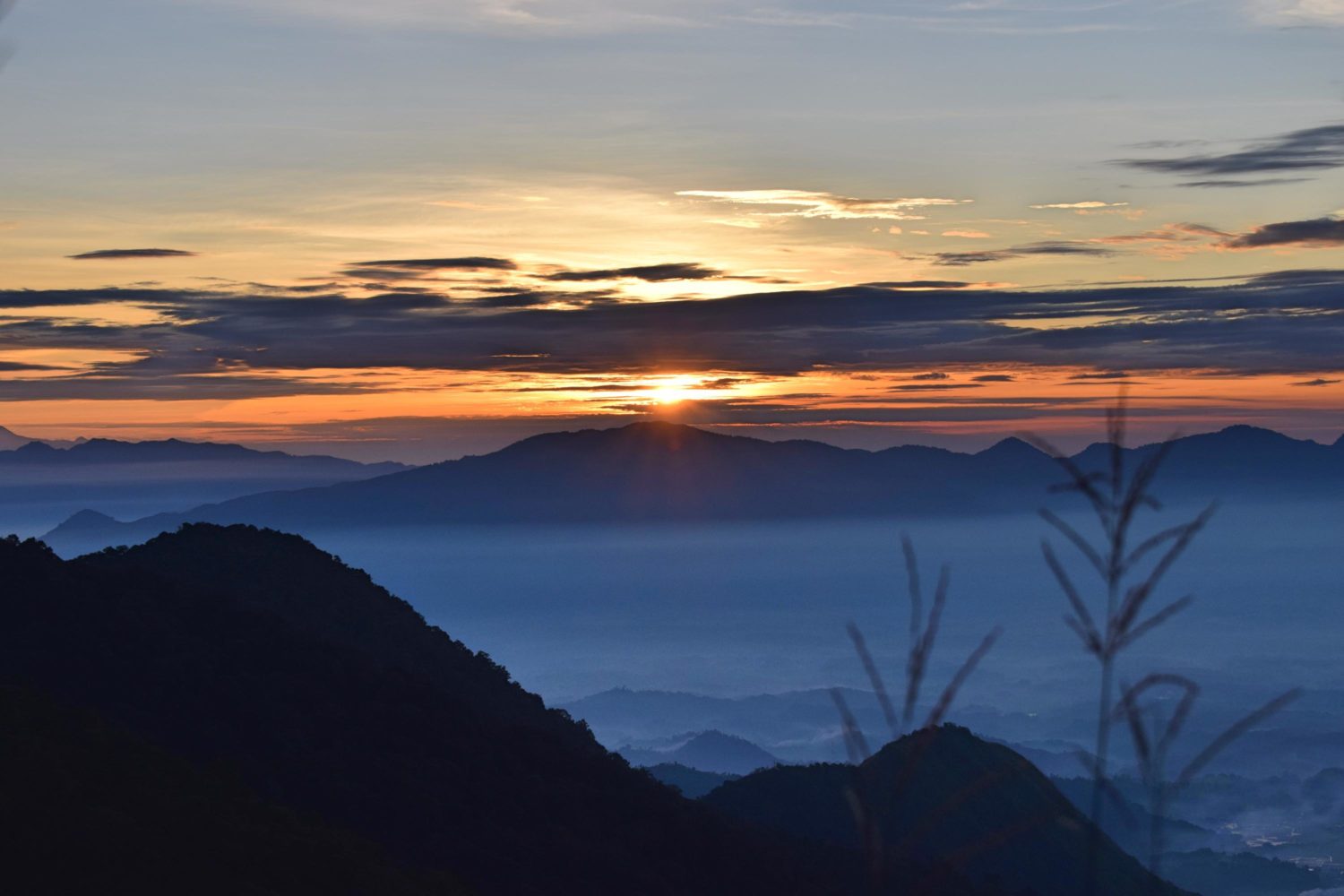 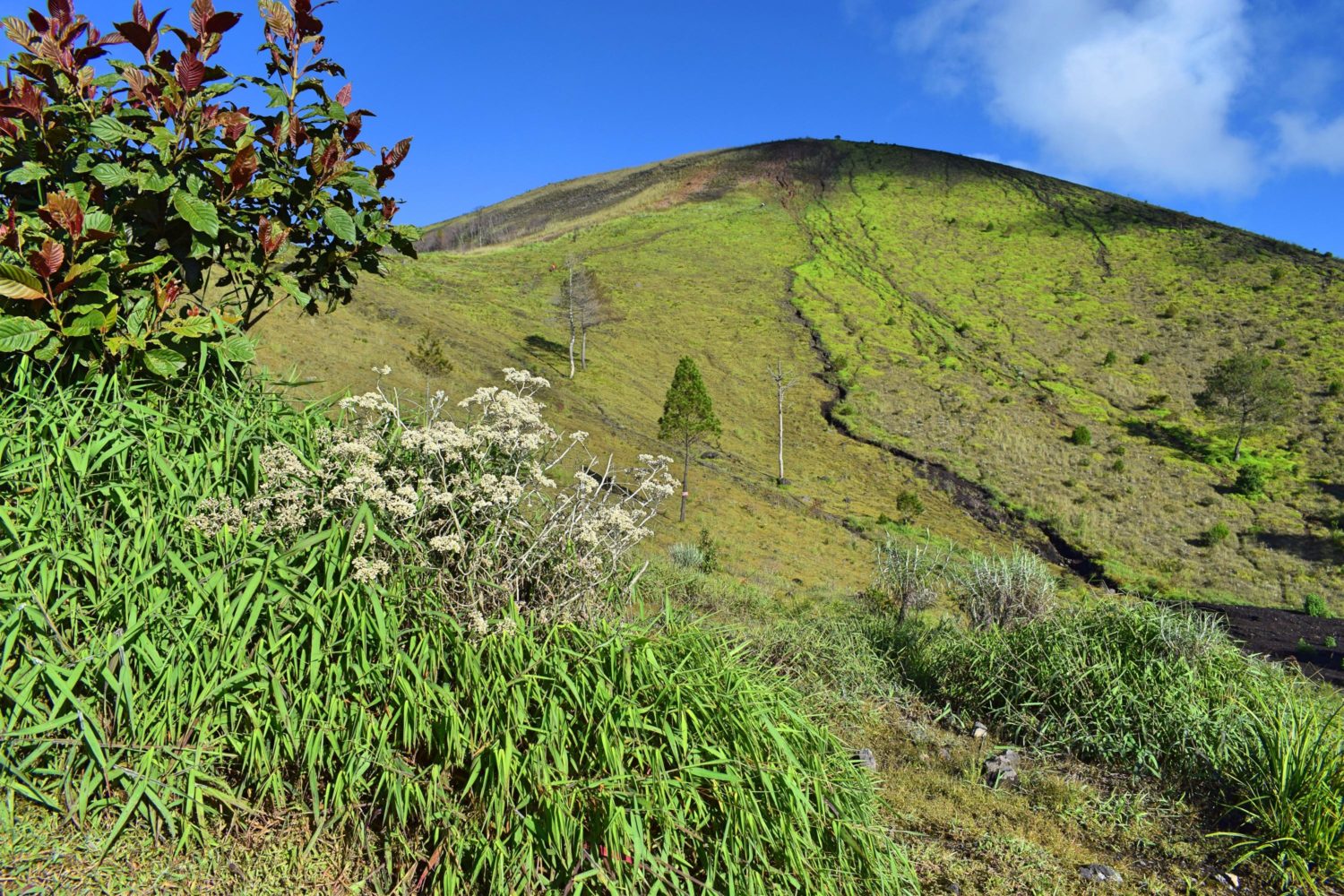 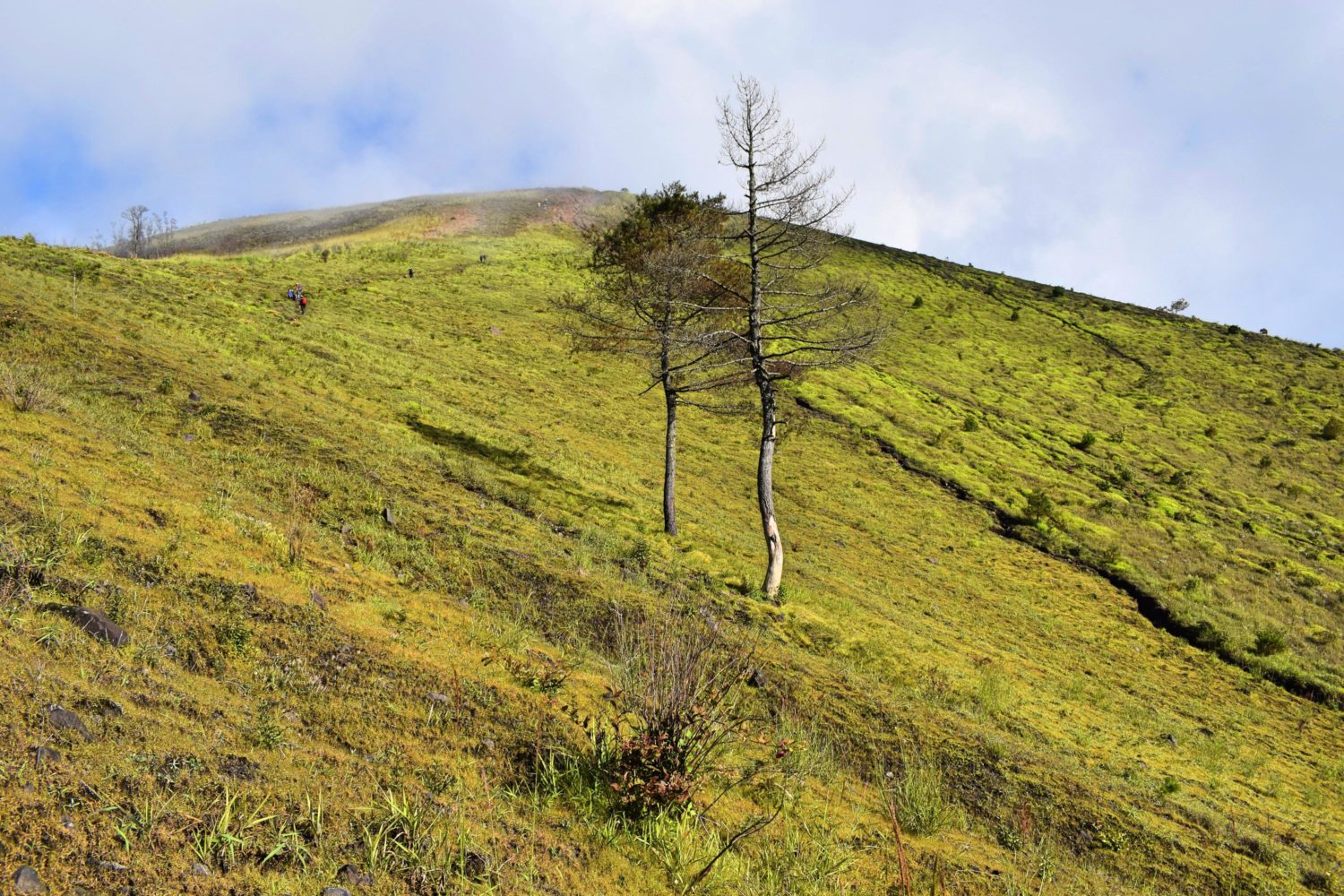 Descending was quite easy. All you have to do is to just slide on the eroded trail. Gaiters are very essential equipment here. Never mind if you don’t have. Just slide and enjoy. The weather was too cooperative. Alternate gloomy and sunny. The river can be accessed upon reaching the campsite all the way through the tree line. Got lost and managed to get back on the trail. But it was pretty close to the basecamp. Team leader’s instruction is to wait at the hut near the river. It was really far from where I went out so I informed Jemmy that I already managed to get back at the basecamp.

Imouzzer Kandar- In Search For The Authentic Hammam